MTSA Technopower B.V. designs and builds the world’s largest power plant on hydrogen. Principal of the project is the Chinese company Ynnovate Shanzheng Fine Chemicals Co. Ltd. in Yingkou, China.
Mid this year the hydrogen power plant will be commissioned. At this moment the installation is being thoroughly tested at MTSA Technopower, prior to being shipped to China.

The 2 MW-e PEM Power plant
The 2 Megawatt fuel cell power plant shall be operated by the company Ynnovate at Yingkou, China. They operate a chlor-alkali plant. At this plant chlorine and caustic soda are being produced by electrolysis of brine (a salt solution in water). Inevitably also electrolysis of water occurs by which hydrogen is being formed. China is the country where by far most chlor-alkali plants are situated.
MTSA Technopower in Arnhem, the Netherlands, started years back on small scale in de world of hydrogen power plants. Together with the stack vendor Nedstack Fuel Cell Technology, MTSA designed and built a number of 4 Kilowatt back-up systems. The next step was considerably larger, this time a demo power plant of 70 Kilowatt for AkzoNobel in Delfzijl. And it didn’t stop there. The next step was a power plant of no less than one Megawatt for the company Solvay in Antwerp, Belgium.

The process
The electrolysis process requires large amounts of electric energy, of which approximately 40% is lost by generating hydrogen. Many chlor-alkali plants simply vent the hydrogen as waste to the air. For this reason the Chinese are interested in the hydrogen fuel cell power plant technology. In the fuel cell plant the byproduct hydrogen reacts with oxygen from air whereby the energy is being converted again to electricity. Hereby also pure water and heat are formed. The electricity and the warm, clean water are reused at the chlor-alkali plant. A very environmentally friendly solution with a lot of savings.
The hydrogen power plant consists of three parts (each exceeding 12 meters in size) connected to each other. Next to the fuel cell stack unit there is a process unit and an electric unit with the inverter and transformers.

The test phase
The test set-up consists of the power plant and a simulation of the utilities at Ynnovate and is of crucial importance to meet the relevant safety demands and corresponding risk management. The test phase will last 3 months. At the end of this stage, the so-called FAT (Factory Acceptance Test) will be executed. Once the total test phase is passed successfully, the power plant is proven safe and reliable. 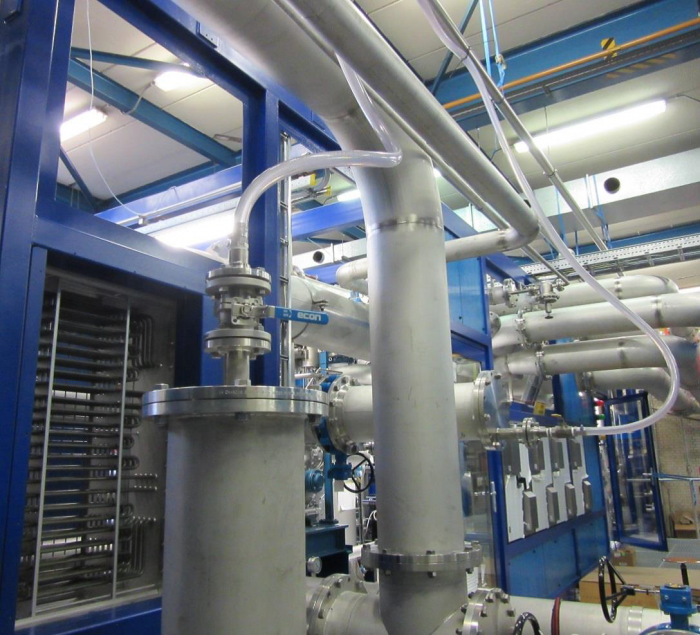 Commissioning in China
After the FAT the units are shipped to China – a journey of one and a half months – to be connected on-site to the existing chlor-alkali plant. Once the units have arrived, a team of specialists will travel to Yingkou to re-erect the power plant and guide the commissioning. Part of the commissioning is the SAT (Site Acceptance Test).
On average some 30 FTE’s are engaged with the project, that commenced at the beginning of last year in Arnhem. And after commissioning the job continues for the Arnhem engineers; they will keep on monitoring the power plant online and intervene if needed. They will also inform other potential customers about the working principle of this “Dutch miracle”, because at this moment the fuel cell hydrogen power plant is unique in the world.
We wouldn’t have been able to realize this project without the support from Fuel Cells and Hydrogen Joint Undertaking program (FCH JU) in Brussels, In this project with the acronym DEMCOPEM, MTSA Technopower cooperates with AkzoNobel Industrial Chemicals, Johnson Matthey Fuel Cells, Nedstack Fuel Cell Technology and Politecnico di Milano.