PEM system up and running

After the Site Acceptance Test, performed mid-September 2016, the 2 MWe PEM fuel cell generator was put into operation. Since then, the operation is performed by the client. A number of small technical optimizations, based on practical experience, were performed by MTSA and Nedstack in this period as well.

The first operational period can be considered as learning period for the client. In this period the client obtained practical experience with the installation. MTSA and Nedstack assisted Ynnovate in the operation,  by remote system monitoring and advice, and also by means of a number of local visits.
There were also a number of technical items to be addressed. It e.g. concerned the fine tuning of control loops and the setting of optimal service conditions for the fuel cells. Further at the moment of Site Acceptance Test (SAT) the unit was not yet capable to function on full capacity. Background was that one of the 6 inverters was not functioning and had to be replaced. Due to this the initial capacity was limited to approximately 1,7 MW. During a visit in January 2017 the last technical items were solved. From that moment on the installation was capable to function on full capacity of 2 MWe.

During this first operational period, the 2 MW unit has proven to be capable to withstand the local ambient conditions, from >35°C in August to <-15 in January, both in operation and standby mode.

An overview of the stack monitoring screen is presented below and shows 2 MWe of fuel cell power being produced after approx. 2000 hrs of operation: 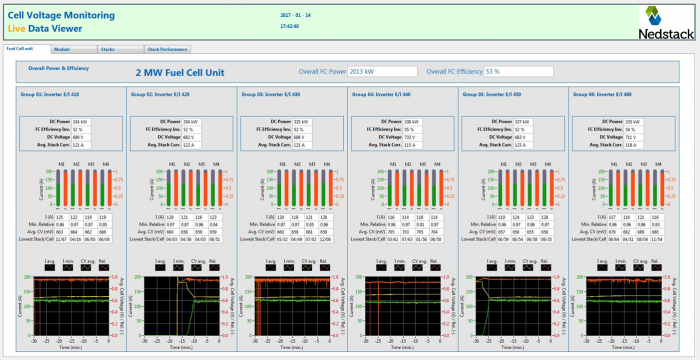